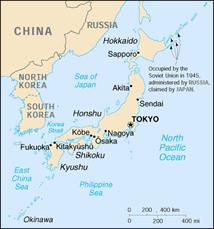 Japan is definitely the most interesting Asian market for Western brands, products and technologies. Since the 60's it arose to Asia's biggest import market and still account for 45% of imported Western retail goods sold in all Asia in 2012. 45% - that is almost half of Asia's total market and in respect to the number of consumers (Japan vs. China for example this is an astonishing figure. However, despite its huge potential size, Japan is very competitive market at all. Most G&S ASIA project clients are interested in this market as Japan requires intense dedication and professionals locally on the ground to take care of business development.

Official name - Japan
Population – 127 million
Official language - Japanese
Currency - Yen (JPY)
Capital city - Tokyo
GDP - purchasing power parity $5.01 trillion
GDP per capita - purchasing power parity $39,100
Japanese Culture Overview
Japan is the land of peace and harmony that continues to evolve in a positive unification of tradition and modernisation. With its elaborate and colourful history and culture, Japan has formed a distinct model of hierarchy, honour and etiquette that is still reflected in many social and business practices today. If your organisation is planning to conduct business with Japan, potential success depends upon an understanding of this culturally influenced protocol.

Japanese culture - Key concepts and values
Wa - The most valued principle still alive in Japanese society today is the concept of 'wa', or 'harmony'. The preservation of social harmony dates back to the first constitution in 604 AD and the teamwork needed when living and working on collective farms. In business terms, 'wa' is reflected in the avoidance of self-assertion and individualism and the preservation of good relationships despite differences in opinion. When doing business with the Japanese it is also important to remember the affect of 'wa' on many patterns of Japanese behaviour, in particular their indirect expression of 'no'.
Kao - One of the fundamental factors of the Japanese social system is the notion of 'face'. Face is a mark of personal pride and forms the basis of an individual's reputation and social status. Preservation of face comes through avoiding confrontations and direct criticism wherever possible. In Japan, causing someone to loose face can be disastrous for business relationships.
Omoiyari - Closely linked to the concepts of 'wa' and 'kao', 'omoiyari' relates to the sense of empathy and loyalty encouraged in Japanese society and practiced in Japanese business culture. In literal terms it means "to imagine another's feelings", therefore building a strong relationship based on trust and mutual feeling is vital for business success in Japan.

Doing Business in Japan
The late 19th and early 20th centuries saw Japan swiftly embrace the numerous influences of western technology. Following the country's defeat in WWII, Japan experienced a remarkable growth in its economy and fast became the world's most successful export. Since then, Japan's business and economy has witnessed a wavering of strengths, however today, Japan is one of the world's leading industrial powers with a new, stable and exciting business market open to foreign investment and trade.

Japan business Part 1 - Working in Japan (Pre-departure)
• Working practices in Japan
o Due to the strong contemporary business competition in Asia, the old concept of the 'unhurried' Japanese negotiation process is no longer applicable. Decisions are made swiftly and efficiently.
o When arranging a business appointment, making a personal call will be more effective than sending a letter and seen as good manners.
o Punctuality is essential in Japan; lateness is as sign of disrespect. Arriving 5 minutes prior to an appointment is good practice.
• Structure and hierarchy in Japanese companies.
o The strong hierarchical structure in Japanese business is reflected in the negotiation process. They begin at the executive level and continue at the middle level. However, decisions will often be made within the group.
o Generally speaking, in business meetings the Japanese will line up in order of seniority, with the most senior person at the front and the least senior person closest to the door. In addition to this rule however, you may find that the most senior person chooses where to sit.
o It is important to bear in mind that in contemporary Japan, even a low ranking individual can become a manager if his or her performance is good.
• Working relationships in Japan
o Due to the influence of Confucianism, it is important to show greater respect to the eldest members in Japanese business culture. Age and rank are strongly connected, however a change in today's business climate means that educational background and ability are often considered over age.
o Personal space is highly valued in Japan due to the densely populated areas in which they live. Physical contact, other than a handshake, is never displayed in public.

Japan business Part 2 - Doing business in Japan
• Business practices in Japan
o Business in Japan cannot begin until the exchange of business cards or 'meishi' has been completed. Use both hands to present your card, which should be printed in both languages. On receiving your counterpart's business card make a show of examining it carefully before placing it on the table. It is important to deal with another's business card with care.
o A significant part of former Japanese business protocol was gift giving. In contemporary Japanese business culture, although not expected, the gesture is still practiced and will be accepted with gratitude. However, be careful not to take too big a gift as it may be regarded as a bribe.
o It is good business practice to engage in small talk before negotiations. Expect your Japanese counterpart to ask questions regarding your education, family and social life. More private questions are not acceptable.
o In Japanese business protocol contracts are not necessarily final agreements or a sign that business in over. In Japan, looking after partners or clients even after business is very important. Aftercare and long-term relationships are positively encouraged.

Japanese business etiquette (Do's and Don'ts)
• DO use apologies where the intention is serious and express gratitude frequently as it is considered polite in Japan.
• DO avoid confrontation or showing negative emotions during business negations. Express opinions openly but evade direct or aggressive refusals.
• DO greet your counterparts with the proper respect and politeness. If your counterpart bows make sure you return the gesture, which is usually performed shortly and shallowly. More often than not, a handshake is sufficient.
• DON'T give excessive praise or encouragement to a single Japanese colleague in front of others. Remember that the group is often more important than the individual.
• DON'T address your Japanese counterpart by their first name unless invited to do so. Use the titles 'Mr' or 'Mrs' or add 'san' to their family name; for example, Mr Hiroshima will be "Hiroshima san"
• DON'T use large hand gestures, unusual facial expressions or dramatic movements. The Japanese do not talk with their hands.

Japanese Culture Quiz - true or false
1. In business meetings it is customary for the most senior person to enter the room last and sit closest to the door.
2. In Japanese the number 4 sounds like the word for 'death' and consequently is deemed unlucky.
3. As in many Western cultures, silence is seen as uncomfortable and avoided where possible.
4. In Japanese culture, laughter is often used to hide feelings such as nervousness, shock, embarrassment, confusion and disapproval.
5. It is not rude to slurp or make noise while eating noodles or drinking tea.

﻿Cultural Quiz - Answers
1. False. The most senior member generally enters the room first, followed by his subordinates in order of rank. The least senior member will sit closest to the door.
2. True.
3. False. Silence is often used as part of the thought process and is never thought of as uncomfortable.
4. True. It is generally used when it is not known what feelings to express.
5. True. It is a positive sign that you are enjoying it!
﻿HK - Tokyo - Seoul - Shanghai - Beijing - Taipei - S'pre - KL - Bangkok - Jakarta © Copyright|All rights reserved. 2003-2020
Hong Kong - Tokyo - Seoul - Shanghai - Beijing - Taipei - Singapore - Kuala Lumpur - Bangkok - Jakarta - Manila - Ho Chi Minh City - Yangon - Phnom Penh
​© Copyright MARKET EXPANSION ASIA |All rights reserved. 2003-2020 ©