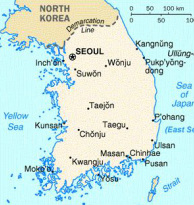 South Korea has performed an astonish economic rise in the past 10-15 years. With just 50 million consumer the country is much smaller than its big neighbours China and Japan, but per head consumption power is high (already EU level) and thirst of consumers for Western goods intense. Therefore, Korea is an Asian export market not to be missed and Western manufacturers may do well in paying special attention to specific Korean business customs and market drivers rather than following a "One Asia" approach. Most of G&S ASIA project clients that do a Japan or China project with us go for Korea in step No. 2.

Official name - Korea, South
Population – 50 million
Official language - Korean
Currency - Korean Won (KRW)
Capital city - Seoul
GDP - purchasing power parity $1.77 trillion
GDP per capita - purchasing power parity $34,777
Doing Business - Meeting & Greeting Etiquette
When doing business in South Korea men greet each other with a slight bow sometimes accompanied with a handshake. When handshaking, the right forearm is often propped up by the left hand. Maintaining eye contact is good etiquette.  In South Korean business culture, women also shake hands. Western women doing business there will need to instigate a handshake with Korean men, as out of politeness, a hand will not be forthcoming. Address people by their title or by their title and family name. First names can be used once a relationship has been established but wait for your Korean counterpart to initiate this change.

Doing Business - Business Card Etiquette
Prior to doing business in South Korea bring a plentiful supply of business cards. They will be exchanged frequently. Try and have one side of the card translated into Korean. Mention your title on the card along with any qualifications - this helps convey your rank.
When presenting or receiving a card, use both hands. After receiving a card, read it and comment on it before putting it into a card case or pocket. Do not shove it into a pocket as this will be viewed as disrespectful.

Doing Business - Gift Giving Etiquette
A part of doing business in South Korea is the exchanging of gifts. It is done to secure favours and build relationships. Gifts are always reciprocated so bring be sure to bring some with you from your native country. Good gifts for a first visit are office items, maybe with your logo on them. After this try and bring items of beauty and craftsmanship. Foodstuffs will also be appreciated. Avoid overly expensive gifts as this will require the recipient to match the value when they reciprocate.

If offered a gift, it is good etiquette to offer some initial resistance.  However, after the giver insists for the second or third time feel free to accept. Gifts are usually not opened in front of the giver, although it may be a good idea to ask if they would like you to do so.

Doing Business - Meetings
Prior to doing business in South Korean ensure you book any meetings well in advance. The most convenient times for doing business are between 10:00 a.m. to 12:00 p.m. and 2:00 p.m. to 4:00 p.m. Times of the year to avoid include holidays like the Lunar New Year (around January/February) and the Moon Festival (around September/October). Punctuality is important in South Korea and being on time is recommended. However, business people are busy and have hectic schedules which may cause them to be late occasionally. Be courteous and do not display any negative emotions if someone is late to meet you.

When entering a meeting room, the most senior member of your delegation should enter the room first and should sit at the middle of the table. Before doing business in South Korea understand that personal relationships generally take precedence over business. A first meeting is a 'get to know' affair rather than focusing on business matters. It could take many business trips to South Korea to reach an agreement or close a deal.